Winter holidays are the most interesting and great. During the winter period Ukrainians celebrate a lot of holidays. So the celebrations start in December. Children wait for their first presents. The 19th of December Ukrainians celebrate St. Nicholas day. Some days before, children write their wishes for Saint Nicholas and 19th December they look for the presents under their pillows. In this day, on the main square the New Year’s tree lights up and winter holidays are officially started !

31 December – 1 January Ukrainians celebrate the New Year and 7 January they celebrate Christmas. Usually the New Year is celebrated with friends and the Christmas with family. The same as in other countries, Ukrainians make wishes when clock strikes midnight, drink champaign and wish a happy New Year to everyone. The next morning children get presents from Father Frost. In Ukraine it’s not Santa Claus who give presents but Did Moroz (« grand-father Frost ») and his grand-daughter Snihuronka (« snih » from Ukrainian « snow »).

The 6 of January it’s Christmas Eve, one of the most interesting and mystic holidays. It has to be 12 dishes (lenten dishes) that symbolize 12 apostles. « Kutia » it is a very important dish that must be on the table. This dish is made from boiled wheat or barley with the adding of honey, nuts, raisins and poppy seeds. But in each region the recipe can be different. Supper starts only when the first star appears in the sky. It symbolizes the birth of Jesus Christ. Family says the grace and after that every member of family should take a spoon of « kutia ». 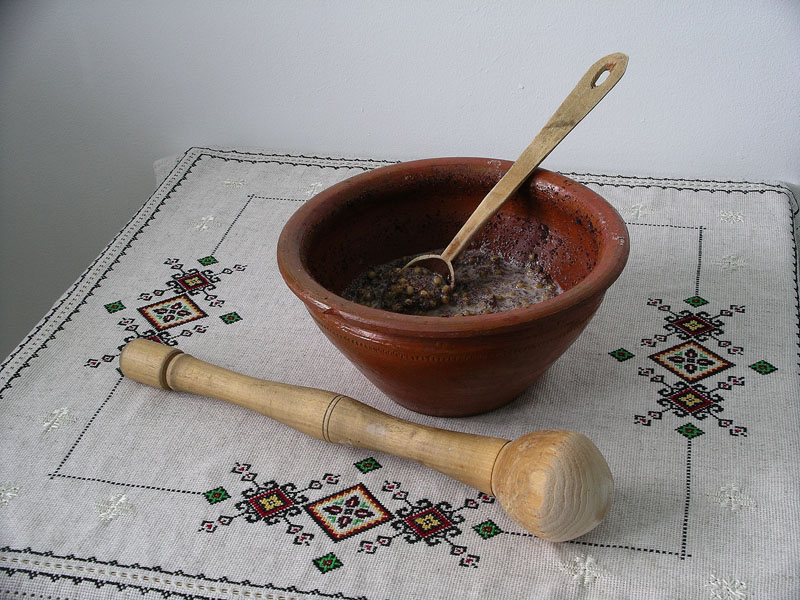 Earlier in the past the young people told fortunes. They wanted to know about their future, love or good luck. Also people did predictions. For example, a lot of starts in the sky means rich harvest of pumpkins, melons and watermelons. If it snows, there will be rich harvest of apples. And if there is hoarfrost, the summer will be rainy.

The 7 of January it is Christmas. Some people go to a church, gathers with families around the festive table. Also there is a tradition to sing « koliadky » (Christmas charols). Young boys go from house to house disguised as folklore characters and sing koliadky or act some folklore sketches. The host should give them money, sweets or meals.

It is interesting to know that in Ukraine there are two New Years. However, the second one almost no one celebrates but this tradition is still alive. The first New Year 31.12 – 01.01 celebrates according to the Gregorian calendar, the second New Year 13-01-14.01 celebrates according to the Julian calendar. For the « Old New Year » there is a tradition to sing « shchedrivky » (the evening on the 13th of January calls « shchedryi » – « generous »), folk songs and « to sow » houses with the wheat or barley (just throw it to the floor). Now I hope you understand why this evening is « generous ». Here you can see an example of a « shchedkivka » :

Which means « I sow your house with the wheat and wish you a happy New Year. I wish that this year would be richer than the previous. I wish you happiness, health and great harvest in this New Year ! ». As you see, such songs came from villages many years ago, but they are still important for the Ukrainian people.

One of the pre-Christian symbols is « Didukh ». This a sheaf of the wheat that symbolize a rich harvest and wealth. In the pagan times it was the symbol of sacrifice. It was brought to a house for Christmas Eve and after the winter holidays it was burned and jumped over the fire. They believed that in this was that can clean their souls from devilry. Also, this ritual meant the ending of winter.

This is how Ukrainians celebrate winter holidays.

Hello everybody! I am glad you're here, in my tiny world of foreign languages. Please feel yourself comfortable, especially if you want to learn more about Ukrainian culture and language. Let's learn together!